skip to main | skip to sidebar

Wisdom ( Write this one down )

In his later years, after the comic was strong and going full blazes Bluto his nemesis appears, then because of ownership to the name Bluto, the almost identical brute appears but his name is now Brutus.   Bluto/Brutus . . . same bully.

In my humble opinion, the greatest of all comics.
Posted by Roy Delgado at 8:03 PM No comments:

" One way to make sure crime doesn't pay is to let the government run it. "

RONALD REAGAN
Former president.  Interview ( 1967 ) President and actor
Posted by Roy Delgado at 8:22 AM No comments:

" The rulers of the state are the only ones who should  have the privilege of lying, either at home or abroad. "

" Government has no other end but the preservation of property. " 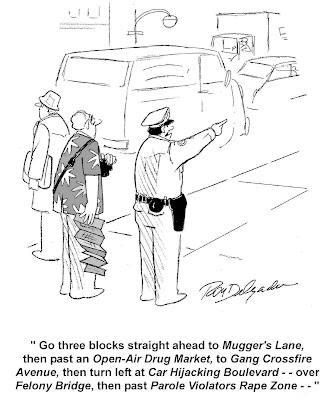 This cartoon reminds me of an incident way back in 1953, while attending art school in LALA land - - - having always had an interest in photography, I got this great idea, I bought an inexpensive camera and feeling bold, one lazy nice balmy Sunday in November I took a bus deep into the bowels of Los Angeles - - - back then, the Cecil Hotel on Main street was about as far downtown it was safe to walk around in without either getting mugged or knifed, so I decided to walk slowly deeper into the abyss - - - I remember walking by Wall Street and I started to notice I was now looking straight at what I came looking for - - - people who were a couple or more notches down the socio-economic scale than I, people I had heard about, people I would see in the news i.e. - - - pan handlers, bums, drug dealers, winos, prostitutes, people with interesting faces who begged to tell you the string of bad luck they were on - - -  who would make great black and white photo studies - - -  back then that is how you would describe them, now, you would say you ran into some people who were homeless, destitute, disadvantaged, victims, disenfranchised - - - maybe it was the same thing, I don't know - - -  all I knew is I felt and believed, for a moment, I was going to be the next Richard Avedon, Arthur Tcholakian, Gordon Parks or some other celebrated pulitzer-prize-winning world class photographer - - -
For a moment I was Walter Mitty fantasizing all of this - - - - then, POOF! - - - just before I was about to take my first photo shot of an unshaven poor wino clutching a paper bag with the bottleneck of a pint of cheap apple wine peeking out of the brown paper bag laying on his back in an alley next to an overflowing garbage can, Man! what a shot, I thought ! - - -  I noticed just as I was about to snap that first picture, I see out of the corner of my eye, a policeman in a squad car motioning to me to come to his car - - -
He said to me: " What are you doing here ? " - - - "You don't belong here, I suggest for you to get back over in a safer part of town. "
That incident, which is as clear as it happened yesterday, makes me wonder - - - Either One, that policeman shattered my dreams of becoming a famous phographer, or two, that policeman saved my life - - - I prefer to think of it as the latter.
Posted by Roy Delgado at 8:53 AM No comments:

Cartoon of the Day 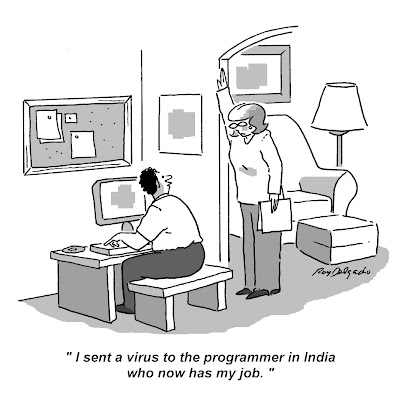 Roy Delgado
Petersburg, WV, United States
After graduating from Tucson High School in 1953 I attended the Billy Hon School of Cartooning in Los Angeles. I then joined the U.S. Marines for four years, and ended up in Washington, D.C.. After getting honourably discharged, I enrolled at the Corcoran School of Art where I studied figure drawing. In 1976 I founded and was CEO of a 34 man sign company specializing in Trade Show Decorations, Exhibits and Signage for the largest 100 Associations in the U.S. We later expanded and added an electrical sign division where we designed and manufactured electrical signs for many Fortune 500 companies. The company was sold in 2oo2. I now draw cartoons passionately full-time from my mountain-top home and studio in wild & wonderful West Virginia. My cartoons have appeared regularly in the Wall Street Journal, Barron's, Harvard Business Review, Reader's Digest, etc. and recently Playboy magazine where Mr. Hefner just purchased 15 colour cartoons in May and June of 2007. CONTACT Roy Delgado PO Box 1135 Petersburg WV 26827 304.749.7137 roy.delgado@gmail.com